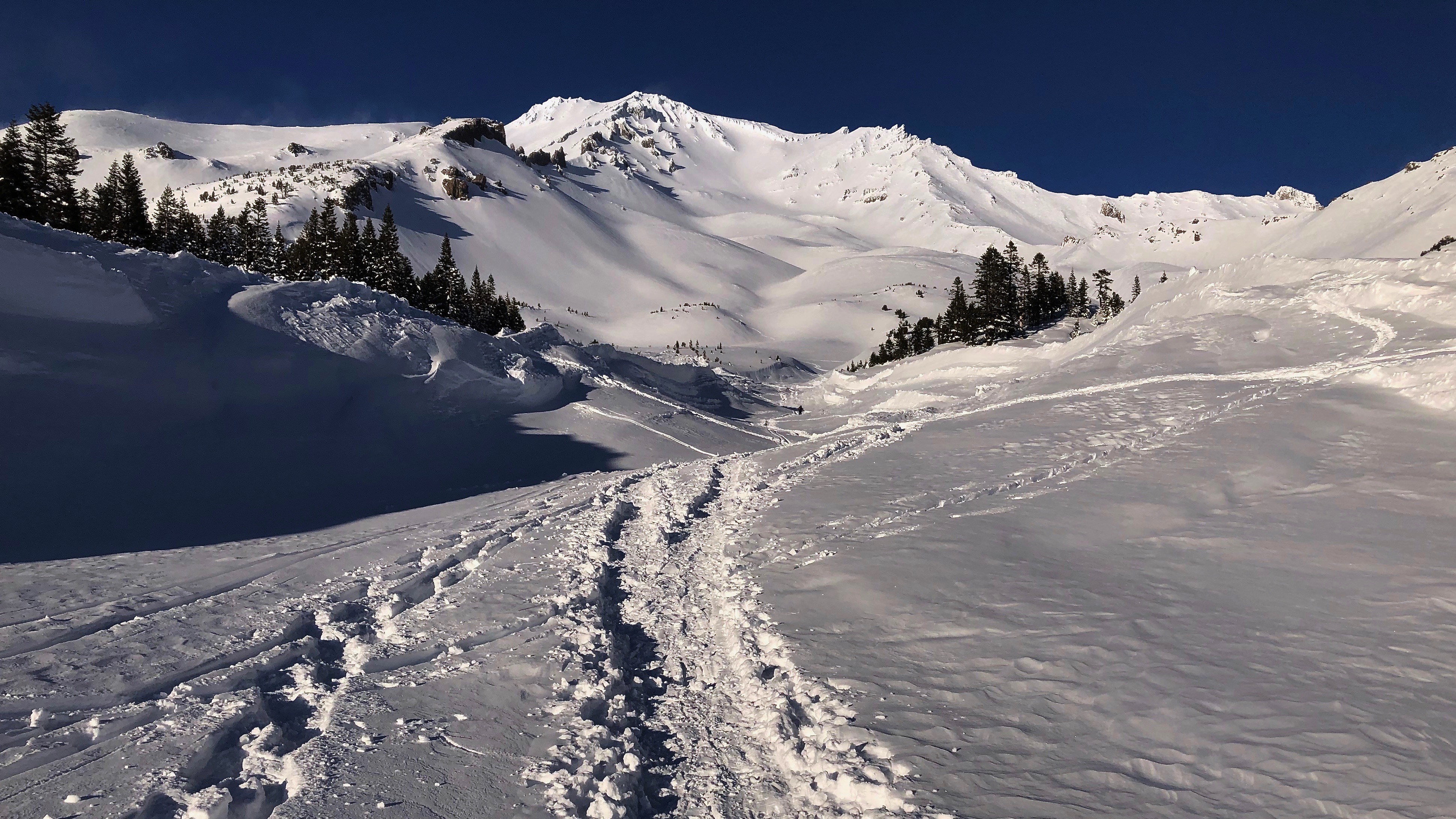 Two major water projects are proposed in the State of California.  One is an expansion of the federal Central Valley Project that would increase the height of the Shasta Dam located about 60 miles south of the Mt. Shasta area.  The original dam, constructed in the 1940s, displaced Indigenous Peoples from their traditional lands, and promised compensations have not yet materialized.  It blocked salmon from their eons-old spawning grounds and significantly reduced the salmon populations above the dam.  Raising the dam would further impact local Tribal lands and cultural resources.  It will also negatively impact the McCloud River, a tributary to Shasta Lake and the Sacramento River, which is currently protected under the California Wild and Scenic Rivers Act.  The purpose of the dam raising is to capture more precipitation run-off and spring outflow to deliver to downstream users.

Secondly, California State is proposing the “Delta Conveyance” Project, an effort to pump even more water (the State Water Project already pumps water from the Bay Area Delta to areas in southern California) from the Sacramento River (above the Delta) to agribusinesses and municipalities in the south.  The project poses serious threats to the Delta, which will be deprived of needed water for sustaining the delta ecology and economy, and could negatively impact our region because ecology moves both ways along the Sacramento River.

Of course the two projects are ultimately linked in that some of the water delivered from the Shasta Dam will likely be shunted to southern California agribusiness.

For some further background, please read "The (Water) Fix Is In."

Crystal Geyser Water Company has proposed operations of a beverage bottling plant in Siskiyou County just outside the boundary of Mt. Shasta City.  W.A.T.E.R. formed to demand an Environmental Impact Report (EIR) be done on the project, as required by the California Environmental Quality Act, because of the likelihood that significant negative impacts would occur from plastic, air, and water pollution, as well as traffic, noise, and over-pumping and degradation of the underlying aquifer.  The County relented and produced a woefully insufficient and scientifically flawed study, then approved the project (see the “History” tab for details).  We are currently challenging the validity of the EIR and the County’s approval in Appellate Court.

Read the expert critiques of the EIR from our CEQA law attorneys and environmental scientists as well as the Appeal documents:

For ALL of the public comments, draft and final EIR and supporting documents click here.

Plastic pollution has become a major global environmental emergency.  If operating, Crystal Geyser Water Company could be producing between 0.5-1 million single use plastic bottles per day thus contributing to this global scourge.  We find this unacceptable and are promoting multiple strategies for reducing global plastic pollution.

W.A.T.E.R. worked with the City of Mt Shasta’s Beautification Committee and other local groups to install a water bottle refill station in Parker Plaza in Downtown Mt. Shasta.  The project was completed in November 2021.  Now locals and the many visitors to Mt. Shasta will be able to refill their reusable water bottles when out and about downtown.  See more below.

Nina Hyatt, volunteer extraordinaire, has prepared a locally focused petition asking Siskiyou County retailers to make available and sell a wider variety of items that are neither made of plastic nor packaged in plastic.  The petition suggests various types of eco-friendly, non-plastic-containing products on the market that could be made available in our local stores, and also asks that retailers remove plastic-bottled beverages from their shelves.  The Petition Report is being circulated among local store managers and owners to request these changes.  You can view the petition report HERE.

Tips to Reduce Your Plastic Consumption:

Plastic beverage bottles are not the only source of plastic pollution.  There are many unnecessary ways plastics have invaded our lifestyles.  We have prepared a “Tip Sheet” with suggestions for how you can reduce plastic consumption in your own life. Check out the list for some suggestions on how to get started, and be creative in designing your own alternatives to plastics.  Click here to read our piece, co-written with volunteer Molly Brown, in the Mt. Shasta Herald’s Sustainability Column.

Senator Udall and Representative Lowenthal have introduced into congress a bill to address the dire plastic pollution issues facing the planet and the disproportionately large part the US plays in that problem.  (The full text of the bill can be found HERE:  A summary and extensive background materials can be found HERE.)  While the legislation is a good start at tackling the problem, there need to be stronger actions taken to reduce plastic production and the many negative environmental impacts of that industry.  See W.A.T.E.R.’s comments on the proposed legislation and the introduced legislation.

W.A.T.E.R. is periodically monitoring water quality at Big Springs and water quality and ground water levels in domestic wells surrounding the CGWC bottling plant.  This data will provide baselines for comparison in the event that CGWC (and/or other industrial operations in the area) begin operations.

The water quality tests monitor for the presence of 16 metals, 41 volatile organic compounds, and 51 semi-volatile organic compounds that are common industrial pollutants with potential negative environmental impacts.  A data set from June 2015 indicated the water at Big Springs is relatively clean.  Here are the test results from November 2019 and January 2020.  The results are similar to the 2015 testing.

We note that the tests do not test for bacterial contamination and although they test for over 100 chemicals, they do not test for everything, so we can only claim the water is free from these specific chemicals above levels of detection.  Moreover, each test is a snapshot in time, thus the results from 2015 or 2019 make no claims about current water quality.  Due to the porous nature of the soils around Big Springs, we highly recommend you avoid drinking the water after precipitation events.

The ongoing data collection of ground water elevation is determining baseline levels and seasonal and drought-related fluctuations in the aquifer(s) underlying the neighborhood surrounding the bottling plant.  In the event that the bottling plant begins operations, this data will help determine the impact of industrial pumping on the aquifer. 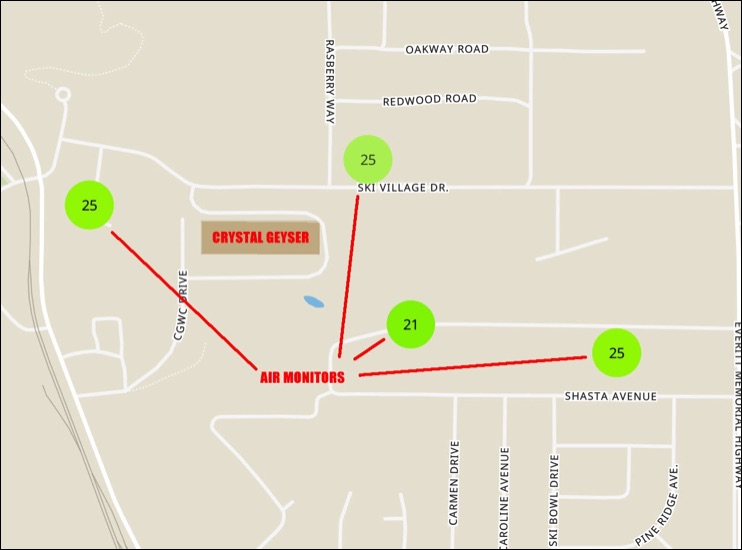 CGWC’s  energy requirements to brew teas and bottle flavored water and carbonated fruit juices surpasses the capacity of the existing electrical system, thus Pacific Power initiated plans to increase the electrical capacity and upgrade infrastructure to meet CGWC demands.  This effort has been cloaked as a need to modernize the system for all rate payers, and yes, all rate payers will be footing the bill for what is essentially an upgrade to support CGWC needs.  The upgrades required approval from the California Public Utilities Commission and that application process is a public process, thus W.A.T.E.R., as well as many community members provided public comment questioning the validity of the project and the thoroughness of the environmental review.  The CPUC, giving little consideration to a large volume of legitimate public concern, approved the project in 2019.

W.A.T.E.R.'s comment letter to the CPUC for the Lassen Substation Project

W.A.T.E.R.'s letter on undergrounding to the Siskiyou County Board of Supervisors

On the north end of Mt. Shasta City, very near the headwaters of the Sacramento River, a land owner proposed to build a storage facility and carwash.  The initial proposal (2017) was poorly defined and after public outcry and pushback from the city, the owner withdrew the proposal.  The project resurfaced in 2019 with more detail but with still-inadequate analyses of the environmental impacts.  Again, there was public outcry and the City Planning Commission denied a permit for the carwash and required a new application for the storage facility.

In 2018 the Loves Truck Stop Corporation proposed a project to construct a large truck stop facility at the south end of the City of Weed off of Interstate 5 adjacent to a residential area and next to a meadow that drains into Boles Creek, a tributary of the Klamath River.  Significant problems with the project include noise and air quality issues for the residents, traffic impacts and pollution of Boles Creek water.  In spite of much public concern, the City of Weed approved the project.  As of this writing, the project is being challenged in court by the neighboring residents’ association.

The City of Mt. Shasta has approved two major upgrades for the City conveyance and wastewater treatment infrastructure.  Because these upgrades are not only necessary for the community but also for the Crystal Geyser beverage bottling plant, we scrutinized them carefully.  The City has approved the projects, but has not yet begun construction.  We continue to follow and evaluate City infrastructure projects for environmental impacts.

For decades, the flows in the Scott and Shasta Rivers have been heavily impacted by diversions for irrigation threatening the salmon that return to the rivers for spawning.  The threat to these fish has become even direr because of the current drought.  Thus the State Water Resources Control Board has issued Emergency Regulations to curtail diversions from the rivers to ensure sufficient water flows for the returning salmon.  W.A.T.E.R. supports these state and local efforts to restore the Shasta River ecosystem.

W.A.T.E.R.’s comment letter to the State Water Resources Control Board regarding the Emergency Regulations

Eloise de la Pedraja and her brother Ash Hanelt give it a try!

It was a ‘blue bird’ day at Parker Plaza when the W.A.T.E.R. group (We Advocate Thorough Environmental Review) dedicated the first Water Refill Station to the town. A group of about 25 community members were there for the celebration, along with Lorie Saunders from the Mt. Shasta Beautification Committee.

Raven Stevens, W.A.T.E.R. Board member and project leader said, “We want to thank the Beautification Committee, the City of Mt. Shasta, specifically Julianna Lucchesi and Murial Terrell, the Public Works Department and our funders for making this a reality today. This device is freeze proof, has an ADA drinking fountain and also a lower bowl for our 4-legged friends.”

The project was funded in part by Plastic Oceans International’s “Rethink. Refill. Program.” This program puts wall-mounted water bottle refill stations in schools in the United States and Mexico. Julie Anderson, Global Executive Director of Plastic Oceans International says “Plastic pollution affects everyone, regardless of socioeconomic standing, and ‘Rethink.Refill.’ levels the playing field. By reaching underserved communities, more youth are better equipped to evaluate their plastic usage, affect change, and improve upon solutions from an early age. Education and data are a powerful combination to empower the next generation.”

Finally, the project funding was completed by community members who donated through W.A.T.E.R.  via North State Giving Tuesday in 2020. W.A.T.E.R. President Frank Toriello spoke noting “It is our hope that this refill station will encourage an end to the prevalence of single-use plastics like the bottles that water is sold in. We are blessed in Mt. Shasta to have water coming out of the tap which has been awarded state-wide recognition three times as the best tasting water and has also been acknowledged nationally!  And now everyone can come and refill their water bottles here for free!”

Stevens commented, “This water refill station is one small step toward minimizing plastic use in our community and the world. It’s important to model the change we want to see. Bring your friends down and show them how we roll!”

This is the completion of a project that will increase access for community and tourists to clean and delicious Mt. Shasta spring water for generations to come!